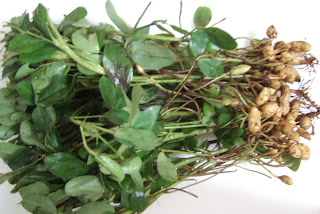 This is an interesting and yummy soup. My mum first heard of it from her neighbour and many parents believe that the roots of peanut help grow taller. I honestly don't know if this is true, but my research on the web makes me want to this soup for my family.

Peanut root, according to research, is full of the anti-oxidant, Resveratrol, usually associated with red wine, which helps protects the heart and lower cholesterol, and helps prevent cancer. The finished soup is full of peanut fragrance and my daughter loves the soup.

Method:
1. Place all ingredients in a soup pot, filled with 4l of water
2. Bring to the boil for 30 mins, then boil over medium-low heat for 2 hrs.
3. salt to taste


Note:
- To wash Peanut Roots, stripe off the top leaves, only leaving those near the bottom. The leaves would give the soup a biter taste. I usually wash it in a bucket, shaking the roots in the water like whisking, to loosen the soil and dirt.
- You can use Chicken instead of pork
- To increase the sweetness of the soup, you can also add 1-2 honeyed dates or dried figs

The French paradox is the strange phenomenon that the French people follow a high-fat diet and smoke a lot, and still have a surprisingly low level of heart disease, one of the lowest rates of heart disease in Europe.

Red wine , according to research, is at work here.

Red wine, which is consumed regularly in the French diet, is rich in antioxidants and has a high content of resveratrol, a plant compound, and other polyphenols, phytonutrients considered to stop the furring of arteries.

Scientists have found agents that combat both heart disease and cancer concentrating on the skin of grapes: this might explain why moderate intake of red wine seems to go with good health.

Peanuts, along with red wine and grapes, have been shown to contain resveratrol. Resveratrol acts as an antioxidant and can reduce the oxidation of bad cholesterol in the arteries.

Antioxidants like resveratrol and vitamin E, also found in peanuts, are believed to reduce the risk of cancer as well as heart disease.

An ounce of peanuts contains about the same amount of resveratrol as almost 2 pounds of grapes. So, a handful of peanuts washed down with a glass of red wine sounds like a good idea and of simple implementation.

San Francisco, April 20, -- Peanuts are another dietary source of heart-healthy resveratrol. Dr. Tim Sanders from the USDA Agricultural Research Service in Raleigh, North Carolina presented a lecture on this and other phytochemicals at the Experimental Biology annual meeting in San Francisco.

Resveratrol, which was found in edible peanut kernels, is a naturally occurring plant compound or phytochemical that protects plants from disease. Present in red wine and grapes, one ounce of peanuts contains approximately 73 micrograms of resveratrol. In comparison, almost 6 cups (or 2 pounds) of grapes contain about the same amount of resveratrol. Red wine contains approximately 160 micrograms per fluid ounce.

While it is not yet known exactly how resveratrol functions as a healthful factor, resveratrol's presence in red wine has been previously associated with reduced cardiovascular disease and it has been credited as a factor in the "French Paradox" (despite a high fat diet, the French have a surprisingly low rate of heart disease).

Results from various research studies have shown that resveratrol may protect against atherosclerosis by preventing the oxidation (or breakdown) of the LDL cholesterol in the blood. This oxidation of LDLs starts the deposition of cholesterol in the walls of arteriesleading to heart disease. Resveratrol may also prevent platelet accumulation in the arteries. This accumulation of platelets can form a clot which can cause a heart attack or stroke by getting stuck in the artery. If this occurs, blood flow is decreased to the heart or the brain.

More recently, research conducted at the University of Illinois at Chicago using resveratrol extracted from grapes showed a reduced risk of cancer in animals by stopping the growth of damaged cells in the body. If these damaged calls were left untouched, they could grow out of control and cause cancer in the body. Resveratrol may work in a number of ways to stop this series of reactions within the body.

This finding on resveratrol in peanuts appears to support epidemiological studies from Loma Linda University, Harvard School of Public Health and University of Minnesota that show peanuts and nuts may reduce the risk of heart disease by more than half when eaten frequently in small amounts. There may be several factors in peanuts that contribute to this healthful effect. Peanuts are an excellent food source of vitamin E. They also provide approximately 2 grams of fiber per ounce, and have relatively high amounts of folic acid, thiamin, niacin, copper, manganese, phosphorous, magnesium, and zinc. They are high in plant protein and the fat content is primarily monounsaturated and polyunsaturated.

The Peanut Institute is a non-profit organization which supports nutrition research and develops educational programs that encourage healthful lifestyles.

teen sister sex stories said...
This comment has been removed by a blog administrator.
December 4, 2010 at 4:06 PM

This is a Flickr badge showing public photos from dandydandan. Make your own badge here.